A Monstrous Talent: an interview with Steve Bissette, part3. 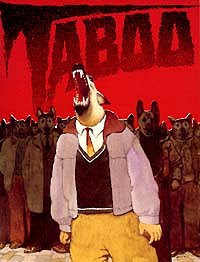 Third part of our exclusive interview and Steve Bissette talks a little more about Swamp Thing and also his self-publishing experience with Taboo.

Wellington Srbek: I believe that Len Wein did a great job back in 1983 hiring a talented but relatively unknown British writer and putting the team together. Later, Karen Berger was very effective defending Swamp Thing when #29 came with all the love, death and necrophilia. But you have said that the #46 Crisis on Infinite Earths crossover was “the begin of the end” for you on Swamp Thing, which I believe has some relation to editorial issues.

Steve Bissette: Well, first of all, Karen rolled with the punches on ST #29 -- initially, she wasn't 'effective defending' as much as on the defensive. She was under a great deal of pressure from DC management due to the Comics Code Authority (CCA) decision to refuse #29 -- first for the zombie imagery, which I defended by sending clippings from the local newspapers (ads for then-current zombie movies on the entertainment pages; the last gasp of the Italian zombie movies of the early '80s were still in theaters, luckily). But then the CCA read the comic, and the implicit necrophilia and incest angle (e.g., Abby having relations with her undead husband Matt, who was possessed by the spirit of her dead uncle Arcane) completely blew up in Karen's face at DC for about a week or so. Complicating everything for her was the fact that her superior, Dick Giordano, was away -- Dick was a member of the CCA at that time, so it really put Karen in a tough position. Ultimately, it was the one-two punch of our growing sales and the impossible deadline crunch that pushed through that issue of Swamp Thing without the CCA seal of approval on it -- there simply was not time to do anything except cancel the issue, period, or put it out as it was. Because of the hard-won sales momentum we had on the series by that time, the gamble was taken to put the issue out sans CCA approval, and the rest is history -- Vertigo emerged from that fateful decision.
So, Karen did fight the good fight, but she did so reluctantly -- the clock was so far against her, and I was always so far behind the eight-ball as penciller, that the final decision was as much one of bad timing as it was 'good' timing.
That said, I indeed felt the intrusion of superheroes, and the whole Crisis crossover lunacy, into what we were doing was toxic. I was so against the introduction of superheroes that early on, Len Wein claimed to be the one who insisted on it -- when Green Lantern, Hawkman and the rest of the Justice League popped up in the final chapter of the Jason Woodrue/Floronic Man arc, our first narrative arc as a team. That was what I was told, so I went with it. Only later did Alan admit HE had been the one who folded the DC universe into what we were doing. I was against it at the time, and was pretty outspoken about that at the time.
The Crisis intrusion was just -- a hassle, and a major interruption. Unfortunately, the Crisis situation was a harbinger of things to come: almost all the mainstream comics from DC and Marvel are now constructed from the top of editorial down, requiring extensive crossover and cross-pollination between series, and its a clusterfuck that I, as a creator and as a reader, have absolutely no interest in or patience with. We only had to mess about with that one issue, but given how few issues I had left to work on by that point in the series, I regret that I wasted an issue's worth of effort on that silly Crisis nonsense.
Now, understand, there were other things going on, too, between DC Comics and myself, some of which I can't comment on -- check out my interview in The Comics Journal (#185, March 1996), and Rick Veitch's in The Comics Journal #175, if you want to know more. Suffice to say, DC had made it difficult, at best, for me to continue working on the series, or on any DC project. I soldiered through, in part due to the chemistry and bond I felt with Alan, John, Rick and the character of Swamp Thing, and in major part thanks to Karen Berger. I felt great loyalty to and affection for Karen; I wish we had done more together, but I was a real 'problem freelancer' and I completely understand why she hasn't wanted to do more together. But I stuck with the series as long as I did, including the subsequent covers and guest scripts, thanks to Karen. In any case, the writing was on the wall by the time we reached ST #40, and I barely made it to #50, what part I played in that issue. I must say that home stretch -- what work I did between #40 and #50 -- was done under considerable duress. I was not a happy camper, and my heart was no longer in it.

WS: As a genre, Horror has a very long tradition in Western arts, driving its vital force from the grotesque imagery. The Flemish artist Hieronymus Bosch, the German Albrecht Dürer and the Spanish Francisco de Goya are three of the great masters of the grotesque arts. And of course we see references to those three masters in Swamp Thing. You were really digging up the roots of Horror, weren’t you?

SB: Yes, and I would have gone further, had there been the opportunity. Taboo was where I went after Swamp Thing, and I think that's a better representation of my personal philosophy and devotion to the genre. I'm very proud of Taboo, and all that anthology embodied and accomplished.

WS: In its own way the Swamp Thing series has addressed racial, sexual and environmental issues. So, how do you see the role of comics on addressing social and political issues?

SB: I was full of piss and vinegar in the 1980s, and really poured all I could (whatever was possible in a mere 30 days) into stories like "The Nukeface Papers." John Totleben, Tom Yeates (especially Tom) and I also worked on comics projects like Real War Stories (published by the Conscientious Objectors Organization) and the like in the day; Neil Gaiman, Michael Zulli and I worked on a PETA comic story, Rick Veitch and I donated work and art to Alan's initial Mad Love project, AARGH, which was out to raise minds and money to fight homophobia in the UK. We did what we could during our tenure on Swamp Thing, within the parameters of a DC comicbook circa the mid-1980s, and I'll also note that the US Army mounted a legal battle -- which they lost -- against Real War Stories. At the time, I felt like it was possible to effectively address sociopolitical issues in comics. That said, you've opened a can of worms with this question. On the one hand, no anti-nuclear activist I know has ever taken "Nukeface" seriously in my experience -- but a lot of people have noted, personally, how much that story impacted on them (don't take my word for it -- see Brad Tuttle's unsolicited comment on my blog today, http://srbissette.com/?p=1396#comments, which arrived AS I was writing this answer to you, Wellington!). The horror genre, to my mind, is a very effective means of addressing social ills, but those actively engaged in fighting such ills usually despise the genre, so it's a sort of vicious circle, conceptually. Still, I think it's valid, and has power.
In the pop culture, films reach far more folks than comics do; so, I'll discuss my genre perceptions in that milieu, for a moment, if only to emphasize my point. For instance, I've written at length in a few venues about how the George W. Bush Presidency spawned a cycle of horror films that confronted issues the American public only recently engaged with; to my mind, the whole "amnesia horror" subgenre (e.g., The Jacket, The Mechanist, etc.) was the pop culture confrontation with America not wanting to confront the consequences of its foreign policies; the so-called 'torture' film cycle (e.g., Hostel, Saw, Captivity, etc.) was the first and for a time only pop cultural engagement with the consequences of Abu Ghraib and Guantanemo; and gems like Bill Paxton's brilliant sleeper Frailty reflect and anticipate the entire Bush era with insight, clarity and unflinching honesty.
That said, comics are a very potent medium. But I think whatever we did in Swamp Thing was relatively meaningless next to the integrity and power of, say, Joe Sacco's Palestine. Joe really opened up a more powerful form of comics journalism than any I'd seen since the post-WW2 graphic novels like Southern Cross. Even in genre comics, it's telling that the underground sf/horror environmental activist anthology Slow Death morphed over a few issues into a more journalistic form, culminating in works like Greg Irons's whaling screed and Bill Stout's "Filipino Massacre." Jack T. Chick's endless procession of religious tracts demonstrate HOW powerful comics can be in hitting people where they live -- if only that kind of comics pamphleteering were being leveled at targets that matter.
I still think it's a remarkably effective medium to address any and all social, political and religious issues, but I've hardly done much in my lifetime to build on that belief. There's never enough time or money, rarely a viable venue -- whenever I've pursued it, it always comes down to cartoonists (who are, by and large, an impoverished lot) donating time, work, art and so on, working with folks who are paid for their time and efforts; now that I'm in my 50s, I've grown weary with that process of invitation/ proposal/ work/ layouts/ volunteerism when I'm so often barely living hand-to-mouth myself. That said, I've got some passionate, skilled young cartoonists at the Center for Cartoon Studies who are absolutely dedicated to this path, and I've been very supportive. They're young and full of piss and vinegar -- so I'll do all I can to help them.
WS: In 1989 you began to publish Taboo, the horror anthology where the early chapters of From Hell and Lost Girls were first published, along with other cutting edge works. Please explain to your Brazilian fans why Taboo was so controversial? And why it folded in 1995?

Next: Steve Bissette explains everything you would like to know about the 1963 miniseries and its "lost Annual".
Postado por Wellington Srbek às 00:01